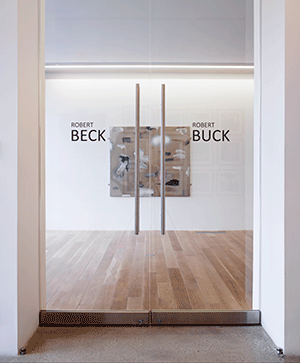 Robert Beck, born in Baltimore, MD, USA, now lives and works in New York City and far west Texas. In 2007, to mark a development in his artistic practice, Beck undertook a change in his surname by a single vowel to Robert Buck, as acknowledged in the title of the survey exhibition at Rennie Colleciton in Vancouver, 'Robert Beck / Robert Buck: Collected Works'.

Working in various mediums (drawing, sculpture, photography, and video) the artist utilizes many artistic procedures, including appropriation and installation. He has returned repeatedly to the universal themes of family, memory, identity, authorship, and loss. While his own singular experiences are central, the artist wittingly withholds information to solicit the viewer's own unique associations.