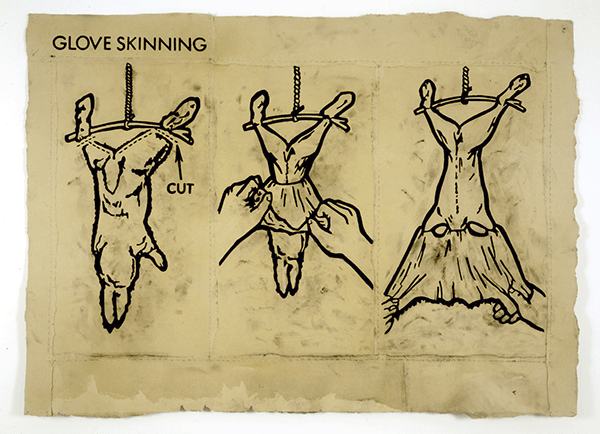 Home is where the heart is. Maybe, but in a political climate where debates over homeland security, gay marriage and gun control vie for center stage, this apparently benign sentiment bears profound personal and collective consequence, as Robert Beck’s multimedia exhibition of new work makes eerily clear.

As an artist, Beck is concerned with revealing the violent underpinnings of cultural myths about the primacy of family and the sanctity of home, the right to privacy and the right to bear arms. He reproduces objects borrowed from real life, often so convincingly that we believe we’re seeing the original: a made-in-U.S.A. product sticker, part of a graffiti-covered men’s room stall; an illustration showing how to skin a rabbit, torn from a hunting manual. But in fact, these objects are handmade by the artist-painted, drawn, sculpted-often painstakingly.

Even when Beck uses found materials, his imprint remains. Three buckets of mortician’s wax (known in the trade as “wound filler") comprise the brilliant Shots No. 12,13, 14 (Daly Over/Under at Close Range with .12 Gauge “Punkin’ Ball Slug) from 2004. The artist made a deep hollow in the greasy fatlike material by firing a gun into the center of each vat, “wounding the very stuff used to fill gunshot wounds in a corpse".

The whole point of Beck’s conceptual enterprise is to challenge perception, to make us question what we think we know. As convincing materially as they are, his artifacts are not replicas, but subtly altered versions whose meanings derive from their deviations. Don’t look to this show for answers; more bravely in times such as ours, it’s questions that Beck is after.