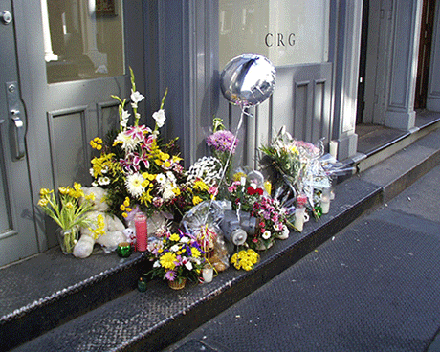 
Visitors on their way to the opening of Robert Beck’s exhibition turned the corner and were shocked by what they saw. On the steps of CRG was one of those makeshift shrines of flowers and photographs that have become the vernacular of communal mourning, whether for Princess Di and JFK, Jr., or unfamous-but-beloved shopkeepers. Without exception, each person entering the gallery asked “Who died?,” fearing that the artist or one of CRG’s three partners had met an untimely end. This kept the mood uneasy, even after it became clear that the shrine was an artwork. It should have been more readily suspected, for Beck has long worked with familiar forms, such as memorial shrines, as well as with the themes of violent death and the ugly underbelly of seemingly normal families.

Involving a conceptual language and handmade objects, Beck’s show was a complicated affair that mixed themes of enforced masculinity (hunting, camping, war play), cultural indoctrination (craft projects with Mom, taxidermy with Dad, standardized testing) and sexual difference (homoerotic and homophobic graffiti). Almost every sculpture could pass for a found object, and many have simple, uninflected titles such as The Pup Tent and Blackboard. The ways these art works diverge from their objective sources are often where Beck’s content is hidden. For instance, The Pup Tent is painted inside as well as out in a camouflage pattern, implying that the boy camping in his parents’ backyard has something to hide from himself as well as from his folks. Just inside the gallery door was a scattered pile of fabricated and rolled-up New York Post newspapers that display the headline “Teenage Time Bomb” and a photo of the adolescent Beck’s cherubic face, indicating the artist’s identification with teen rage. As we pieced this fragmented narrative together, it became clear that the fictitous-newspaper Beck did not survive his rampage. We were shown a video, The Memorial Screening, 1974-the year when Beck would have been 16, discovering his homosexuality and wanting out of the suburbs-with a sound track of era-specific pop references like Helen Reddy and Neil Diamond. The work perfectly captures the maudlin quality of video tributes as it switches from still images to vintage home movies of the teenage Beck pointing a gun and seeming to shoot. It is a shocking moment, but it suggests that high-school violence should come as no surprise: the gun is great in America, and the pressure to conform intense. After Columbine, it seemed strange that so few commentators admitted to remembering the rage of their youth. It was painful but revelatory for Beck to remind me of those mornings in my teens when I would have happily blown up my school.