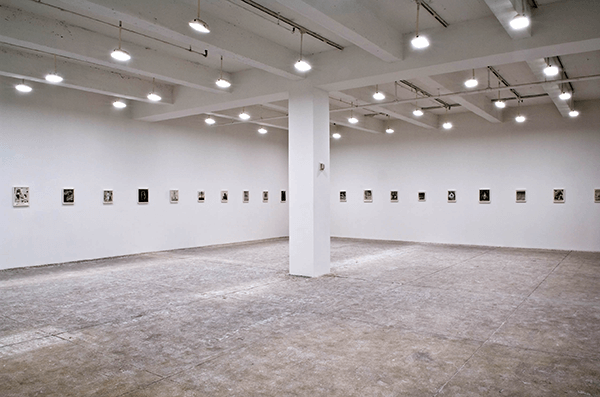 Through architectural intervention in the gallery, Robert Beck directed viewers’ thoughts to the transience of this exhibition and to the concept behind it: “diagnostic drawings,” which assist psychologists in the assessment of a patient’s personality. A suite of 45 framed works were appropriated from published drawings and texts from various sources and (according to gallery information) are the culmination and conclusion of the artist’s 10-year body of work addressing such material.

Beck created a long, sparsely illuminated foyer by sealing off much of the area that functions as the gallery’s entrance. A block of intense light spilling into the far end of this vacant foyer signaled the exhibition space beyond. The main room was lined with a closely spaced succession of small works and, more unusually, paved with text. Over a period of years, Beck’s practice has been to layer aspects of the arcane imagery of one picture with elements from another, adding texts identifying the original source and the subject’s written response that appear as if typed on the surface of the picture. For example, a framed 9 1/4-by-7-inch surrealistic image of a weeping woman consists of a drawing adapted by Beck in 1998 from its published source overlain with elements from a second drawing added in 2007. With passing resemblance to a Picasso portrait, Beck’s work was executed in acrylic paint, carbon, conte crayon, graphite, ink, latent fingerprint powder and tape on paper and identified as Untitled (“Camera Obscura: A Journal of Feminist and Film Theory: 2″/ “Art as Healing” by Edward Adamson), 1998-2007. Added to the first rendering is the reductive form of a bird that appears to fly from its nest, as well as a second eye resting like a tear on the subject’s cheek. The Adamson book on the healing capacity of art includes more such drawings and explanations of case histories. Here the interpretive text, presumably that of Adamson, reads: “The Tear. We see a woman’s eye from which a tear drops, that is the eye itself.”

A grid of 36 intense industrial lamps pointed downward to an aggregate concrete paving obsessively covered with writing in chalk, a device Beck also employed in an exhibition at the Wexner Center in the summer of 2007 to suggest attrition, latency and interconnection. At CRG he monitored the fleeting presence of visitors through the erosion that offered permutations of the exhibition’s title, “How am I to sign myself.” The phrase is abstracted from the closing of a letter written in August 1904 by James Joyce, addressed to his lover and companion, Nora Barnacle. However ambiguously, the phrase-amended in rhyme, anagrams and other evocative permutations-resonated with Beck’s diagnostic drawings, each representative of a fleeting search for identity. – Edward Leffingwell