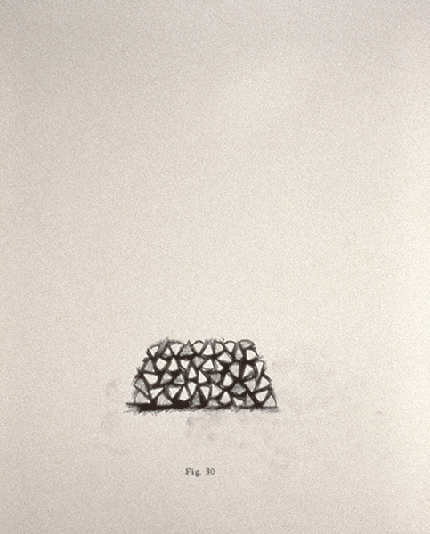 
Robert Beck’s recent exhibition was a show of fragments, both in the sense that some of the individual pieces were components of larger, thematically based installations, and more important, in that each work comprised one term in an extended network of signification. The ten drawings contain figure numbers and references to sources ranging from a psychoanalytic tract by Lacan to a catalogue of hunting gear; some refer to narratives of the artist’s invention. They were grouped with four Polaroids: an architectural detail, a blank brick wall, a man lying with arm outstretched in a log cabin, and a cornfield.

Several of these untitled drawings are directly linked to earlier works such as November Spawned a Monster, 1993, and The Tail Gunner’s Vulgar Revenge, 1994 and along with the cornfield Polaroid- Untitled (Carroll County. MD, 11/I3/96), 1997 – they allude to the “Habeas Corpus” series. This series uses magazine-page formats to present captioned photos of young men, the bland surfaces of which nevertheless call to mind disturbing scenarios that often take the form of evidentiary narratives with potentially violent homoerotic overtones. The Cornfield, 1994, for example, is a double-page spread of a plowed field with yearbook-type photos of boys superimposed over the harvested remains. Though neither the landscape nor the portraits are in any way exceptional, their juxtaposition on the page invokes a tabloid story focusing on some gruesome crime. Beck’s work draws from a primal source in true-crime pulp, a genre that was exceptional (pre-Stonewall) for allowing a coded discussion of homoerotic possibility (“physique magazines being another). Likewise, Beck holds out the metaphor of “the woods both as a site outside the strictures of everyday life and a place of incipient danger. The artist takes pains to remove overt erotic charge from his work, and in rejecting a determinate narrative that would contextualize the “evidence his works proffer, he also refuses to “produce the body in either its juridical or libidinal coherence.

In the recent works on view, the body has almost disappeared, and instead Beck represents his concerns using imagery derived mainly from medical and technical illustrations. Though the relation such representations bear to text is supposedly explanatory, Beck highlights their overdetermined quality, which goes beyond a purely didactic function. He reflexively implicates himself in this process by his repeated slippages, by refusing to accurately copy his source material; his drawings are full of smudges and half-starts, errant marks that mar the reproductions. The excess that binds these works to Beck’s larger project is particularly evident in his drawings after Lacan and Bruno Bettelheim. In Lacan’s diagram of the sexual drive, the analyst uses a metaphor from archery, the curve of an arrow that is continuously rising and descending though the same plane to show the discontinuity between sexual aim and goal-that the aim of the drive can never be biological reproduction or any other goal, but simply a return to this endless loop. For Beck, Lacan’s diagram resonates not only with his own hunting imagery but with the dosed- circuit metaphors-the blank wall, the always-already harvested field-found in the Polaroids. Analogously, his work after an autistic child’s drawing of a house in the form of a woodpile, which appears in Bettelheim’s The Empty Fortress, not only seems to comment on recent allegations of the analyst’s abusive treatment of the children under his care, but crystallizes all the associations of malevolence in Beck’s recurrent theme of the woods, begging the question that could be an epigraph for his entire project: What happened in the woodshed?