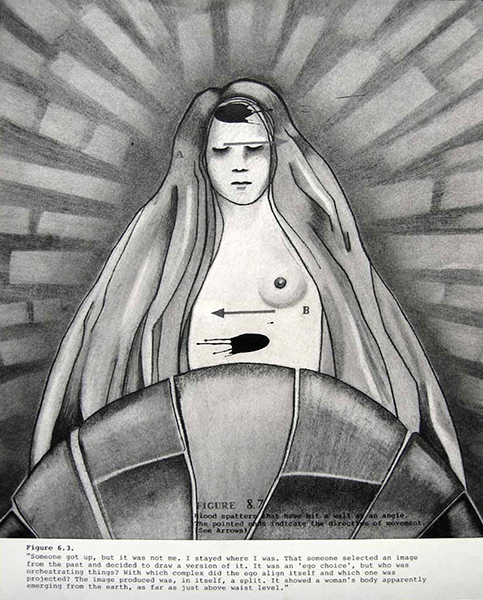 Failure can be productive, Robert Beck’s most recent exhibition tells us. The drawings on view constitute the final installment of a body of work that takes as its point of departure “projective psychological testing”—the method of art therapy that requires patients to draw certain items (houses, trees, people) with a view to giving form to their subconsciouses. Beck’s latest works, like their predecessors, contain the artist’s (loose) re-creations of actual patient drawings and snippets of text from their doctors’ assessments, but they are distinguished by one salient detail: Each begins with an earlier drawing that Beck deemed insufficient to show on its own, on top of which he illustrates a second, sometimes a third case study. The resultant compositions depict figures in crude outline, or trapped in bubbles. Breasts drip blood and skeletal limbs reach upward like tree branches. We see Christ, the Devil, blue tears, and black doves. Sex and death become spatial elements. The process for all, and the imagery in many, is the same, yet the styles vary wildly. One work, focusing on a patient who has undergone shock treatment, features scratchy de Kooning-like women; alongside it hangs a sharply drawn—”flagrantly irrational,” as the doctor puts it—surrealist composition.

In overlaying images, Beck builds up a multitude of voices (the patient’s, the doctor’s, Freud’s, his own) that compete with one another to say something of value about the mental condition, the artwork, the motive. The compositions, in other words, in their cacophony, question the very thesis of psychological testing, the notion that one can “read” another’s innermost workings, that analysis— psycho- or otherwise—can ferret out some essence. While the past here does indeed figure in the present, the connecting narrative is too tangled to be legible. For instance, in one work, Beck embeds hunting imagery taken from a how-to manual, complicating the case studies at hand by calling on other histories, both collective (involving wilderness survival, traditional father-son bonding rites) and personal (the book, given to him by his parents, has also provided material for earlier drawings). The sense of tenuous symbiosis, between past and present, between subject and interpreter, is underscored by Beck’s insistence on the “trace,” as made apparent by the show’s title, “How am I to sign myself” (the closing of a love letter written by James Joyce). The gesture of signing oneself, in both senses of the term, is expressive of one’s interior—if the self-consciousness that accompanies it is any indication—though that expression, implicated as it is with performance, can never be pure.

The trace, as a theme, is also illustrated by Beck’s incorporation of “latent fingerprint powder.” (Beck uses the material as he did mortician’s “wound filler” in earlier work, as a ready-made layer of associations.) The evidentiary properties of the (barely visible) powder are shared by the (very visible) chalk in which variations on the exhibition title—SIGN MYSELF, ASSIGN ME, SINGLE MYSELF, SHELF MY SONG- ere written, and increasingly smudged and footprinted, on the floor. While few of the drawings are strong enough to stand on their own, together they become aGesamtkunstwerk, an impression aided by the floor drawing and by the fact that the gallery (an oppressive, harshly lighted room within the main space) was built by the artist. Read in this institutional setting, the typewritten phrases—INTELLECTUAL DETERIORATION, PSYCHOSEXUAL CONFUSION, POOR INTEGRATION, WITHDRAWAL TENDENCIES, TENDENCIES TOWARD VIOLENCE, EXALTED EGO SENSE, COMPLETE LACK OF EGO IDENTIFICATION—seem assertions of power that point, more than anything, to themselves as elaborate constructions.