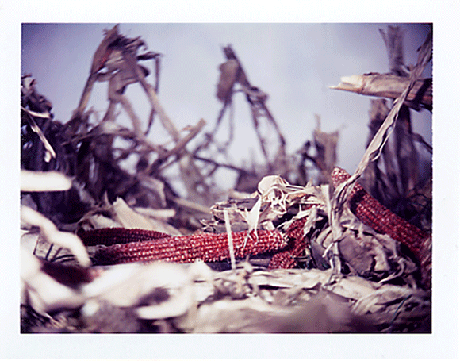 
In his second solo exhibition, Robert Beck’s fascination with suggestion, innuendo and mystery has descended into almost complete mysteriousness, becoming virtually indecipherable to the casual viewer. In the past his fastidious combinations of words and text – some which he lifts from magazines and other sources, some of which he creates himself – have implied surprisingly large, painful narratives, stories of teenage passion and alienation and intimations of shadowy crimes.

For this exhibition, Mr. Beck offers small reticent drawings and three rather beautiful Polaroids. Some of his drawings copy i1lustrations and diagrams from books by Freud, Jacques Lacan and Bruno Bettelheim; a book on crime investigation, and another, “The Basement,” by Kate Millett. Other drawings refer to the artist’s previous works.

Only the drawing based on the Millett story and the three Polaroids come close to standing on their own. The drawing shows an awkwardly scrawled letter by a kidnap victim to her parents, dictated by her captor, that begins: “Dear Mr. and Mrs. Linkens.” The Polaroids have a subtle sinister beauty. One shows a reclining figure, seen from a bug’s-eye angle, who could be napping or possibly murdered. Another, of cornstalks in a field, has the hallucinatory artificiality of a painting by Yves Tanguy.

It’s gratifying to see Mr. Beck’s cerebral, photographically inclined sensibility reveal such a deft, tender drawing style. But otherwise this show only hints at his prior obsession with the darker side of adolescence and of life in general. It’s not enough.