The Shrine (from e to u)
Art Institute of Chicago
Chicago, IL
11 April – 9 May 2015
On Site Installation
Organized by John Neff 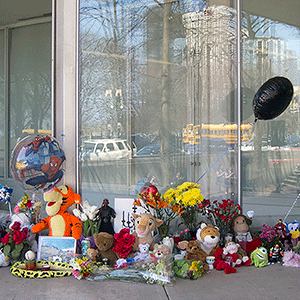 Iceberg Projects host an exhibition of early works by Robert Beck and announce a recent outdoor installation by Robert Buck at the School of the Art Institute of Chicago. Together, they comprise the artist's first exhibition in Chicago.

In 2008, as an artistic act or maneuver, one precipitated by the evolution of his work, the artist changed his last name by a single vowel - from Beck to Buck. Curator John Neff saw Beck's "true crime" photomontages in reproduction in the mid-1990s. In 2014, he sought out Buck to organize an exhibition of those works, one of which, "The Cornfield" (1995), will be on display. With the inclusion of other "evidentiary" pieces, the exhibition presents an abridged survey of fundamental images and themes in Buck's work in light of his name change.

Buck will install his public work, "The Shrine (from e to u)" (2000/2012), on the exterior of the School of the Art Institute's Columbus Avenue building. He will also collaborate with scholar Jeremy Biles on a recorded dialogue for future release. The exhibition will run from 11 April - 9 May 2015.