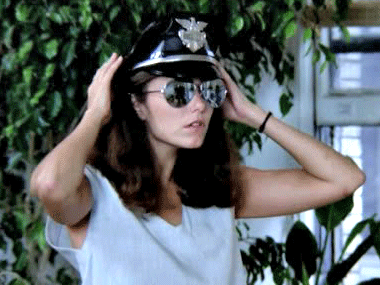 In 1998, twenty years after production began on William Friedkin’s 1980 notorious, gay leather underground crime thriller, Cruising, I reversed it scene by scene. The 'from behind' approach was suggested by the logic of the film itself. The narrative dissonance of the original film is amplified in Back to Front, the reciprocity of law and desire patent. Moving in reverse, outcome cruises cause, with often queer effects. For instance, straight intercourse isn’t an anodyne for gay sex, but a push towards it, and heteronormativity yearns for sexual lawlessness. The event that haunts my intervention is the one that incites it: Karen Allen donning Pacino’s S&M leather gear and lurking, 'dragging', up behind him on the soundtrack. Upshot: The Other sex, not-all, non-localizable, betrays the underlying, real, phobia in Friedkin’s erotic thriller. “How would you like to disappear?”
x