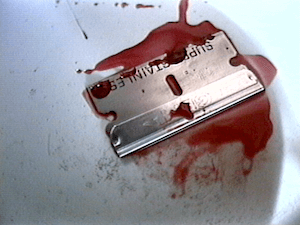 When the superficial, yet real, cutting of my forearm in the 1996 Nine Years Later (“Panic”) triggered visceral reactions, I revisited the work. In Remix, the hinged structure is reversed, with my performative affront following the outtakes, inter-titles and voice-over rehearsals. Combined, these elements recalibrate the evolution of video technology and its corporeal effects. The cut of montage is experienced more acutely in the re-edited version, and the process of sublimation is explicit. The Theater of Cruelty, Grand Guignol, Robert Bresson, punk rock and George Romero’s 1978 film Martin, influenced my dramatization of troubled youth. The mirror has an edge!
x