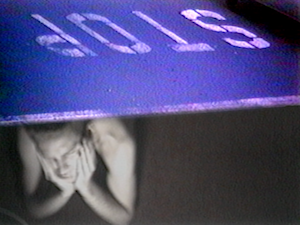 "Originally broadcast late night on Manhattan Cable Television, The Space Program is an early, largely unconsidered work in the artist’s career. The series, a catalytic work for Beck/Buck, undertaken before he participated in the Whitney Independent Study Program in 1993 and emerged on the visual art scene in the 90s, should be considered alongside such artistic television interventions as Gerry Schum’s TV Gallery, Chris Burden’s TV commercials, and Alex Bag’s Cash from Chaos / Unicorns & Rainbows for its use of television as a staging ground for artistic experimentation. Broadcast regularly for the better part of a year, Beck undertook each half-hour episode as a conceptual performance, using duration, the context of television, and video technology as expressive tools. Beck’s programs—one composed entirely of establishing shots from prime-time soap operas, another composed of the artist’s blurred face accompanied by sounds of a shooting rampage—were likely encountered by accident, with no context other than the haphazard surrounding programs, emphasizing art’s capacity to unsettle the known and open up a path into the unknown." – Rebecca Cleman, Electronic Arts Intermix
x