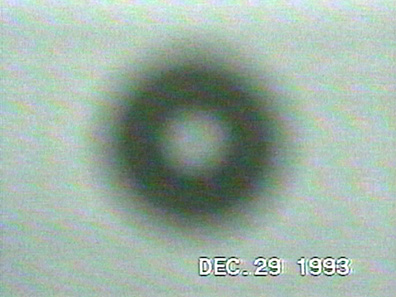 Untitled (Dec. 29, 1993) haphazardly records two seemingly simple tasks, the operation of a home-video camera and the safe use of a firearm. The lens-cap is mistakenly left on the camera, and the often tense exchange between the father and son participants is not seen but heard. With the camera on auto-focus, their actions, abstracted by the plastic lens-cap, create a pulsating orifice, aperture or target of shadow and light. After successive shots are fired, the son flees the scene with the camera, and the turbulence of the impaired image seems to express the unsettling implications of the event. While the image fluctuates, the on-screen date-stamp remains invariable.
x