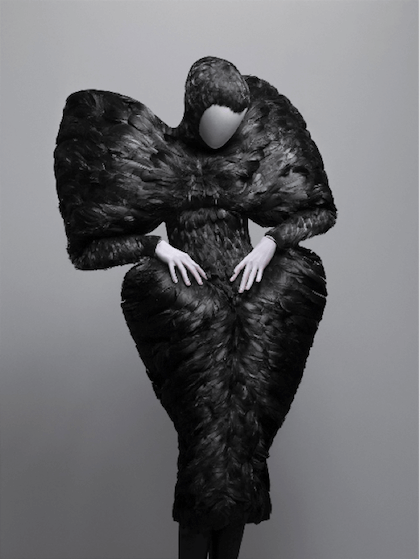 THESIS: The phenomenon of “Savage Beauty” by Alexander McQueen at The Met, we would like to suggest, traces the permutations of the object gaze and scopic drive in the hypermodern era.

Gerard Wajcman - “And from all this, I conclude that we have become a civilization of the gaze.”

McQueen’s work/ Runway / exhibition as distinct: exhibition re-organizes the gaze of the runway spectacle in McQueen’s work: Runway as lost to the exhibition. Museum as mausoleum and the lost object – fashion needs a body!

Within the exhibition there is the intervention of masks – mannequins look at you but doesn’t see you – re-positioning of the fashion object in contemporary culture by exploiting the gaze as blind – somehow it may be better able to grapple with the emergence of a more pervasive and ever-present gaze – the rise of the object gaze to an unprecedented place, resulting from the proliferation of new technologies.

3. “Universal eye and the limitless gaze”

Emerging paradigm characterized by surveillance and fantasy of technology, which creates a limitless world where even jouissance can be rendered visible.

McQueen’s work, and the site of the exhibition as a phenomenon of contemporary culture suggests, struggle to contend with the eye being everywhere and the displacement of the body, eye, and gaze.

McQueen’s work, in difference to more traditional art forms, situates itself in this new circuit of the scopic drive, something that Lacan identifies in the 1970s.

He created an arena in which he was able to grapple with the gaze, the object-gaze, body, phallus.

Quote: McQueen “I want to be the purveyor of a certain silhouette or way of cutting, so when I’m dead and gone people will know that the 21st Century was started by Alexander McQueen.”

Fashion and “the look” – “looks” each season walk down the runway – the signifier of the gaze – the spectacle of the fashion show distinct from the museum show as it relates to the gaze.

Quote: Seminar XI; “If I’m anything in the picture, it is always in the form of the screen, which I earlier called the stain, the spot.”

a. Split between the eye (geometral, optical, spacial) and the gaze (light and opacity) introduces function of the screen XI.6 “The eye and the gaze – this is for us the split in which the drive is manifested in the level of the scopic field”
b. Gaze as that which does not see you but looks nevertheless (sardine can) ¬ the gaze comes from behind
c. Gaze as spread-out pervasive
d. Gaze comes from the outside of the picture, gaze as gaze of the other
e. He looks, He looks at her, she is looked at (the gaze is always from the place of the Other) – does fantasy emerge on runway?
f. Gaze and the lack/veil – (fable of Zeuxis & Parrhasios) – desire in the scopic drive – if there were no veil, there’s nothing to constitute what’s not behind it.


XI.8 “From the outset, we see, in the dialectic of the eye and the gaze, that there is no coincidence, but, on the contrary, a lure”

Lacan’s interest in the gaze has to do with the primacy of desire in the object gaze and scopic drive above other objects (minus phi, phallus, castration) circulation of the drive through the inter-net and the “hungry empty center”

Screen (which both masks and manifests the gaze – by displacing the gaze McQueen calls greater attention to it – over and above painting – and the McQueen gaze comes from beyond the spectacle of the museum exhibition), picture, gaze, and stain.

XI.9: “isolates function of the screen and plays with it . . . man in effect knows how to play with the mask as that beyond which there is the gaze”

Stain: only place in the picture the subject appears is as stain ¬¬– Trompe l’oeil stain – double screen – mimicry.

XI.8 “And if I m anything in the picture, it is always in the form of the screen which I earlier called the stain, the spot.”

The dematerialized body (brings forth the gaze)

XI.7 “How can we not see here, eminent in the gemoetral dimensions – a partial dimension in the field of the gaze, a dimension that has nothing to do with vision as such, something symbolic of the function of the lack, of the appearance of the phallic ghost.”

Not-all – Feminine structure – Other Jouissance (castrated woman) – jouissance beyond phallic jouissance – woman who knows that the phallus is a semblant – McQueen works with the – bonded, blinded, crippling shoes.

Quote: McQueen: “I want to empower woman, I want people to be afraid of the women I dress.”

“When you see a woman wearing McQueen, there is a certain hardness to the clothes that makes her look powerful, it kind of fends people off.”

“It’s almost like putting armor on a woman. It’s a very psychological way of dressing.”

McQueen’s representation of women: Not the phallic woman as his words suggest (Phallic woman: woman who has the phallus), his women are entirely castrated on the runway – totally subjected to the phallic function but there exists for McQueen’s woman a joussance beyond phallic joussiance. Other Jouissance pours from the collections.

In the exhibition: Women are phallusized to produce the effect of the screen to hide/manifest the object – McQueen knows the phallus is a semblant – Name-of-the-Father as veil – the eight veils (Wajcman)

McQueen’s knowledge of the phallus as a semblant: Wrapping body in veil of symbolic – dressing in institution of symbolic order – NOF (Christ as image).

Wacjamn: 8th veil – what is beyond the skin – object a/lack behind the veil

Site: Marie Helen Brousse: “Ordinary Psychosis In Light of Lacan’s Theory of Discourse”, Era of the Not-All, decline of the N-O-F, Era of the Exception

In the era of the Other That Doesn’t Exist, the gaze as object (as semblant) becomes pervasive.

McQueen works in the gap between the eye and the gaze, afforded by the ascendance of technology and the alethoesphere/lathoose.

Gueguen: “The good form’ par excellence, the shape of the human body, has been disappearing in favor of works that are ever more outside of meaning. Art is no longer aiming at the beautiful or transcendent. It has become ferociously ironic.”

PGG: bifurcated nature of the object – art object extracted form the body vs. object of mass production as siphon of jouissance (BAD ROMANCE vs. in the show as already lost – the physical object and the gaze)

Hysteric protests with the symptom against the ascendance of science in Freud’s time.

What do we make of the reemergence of romanticism in McQueen’s work, but now with the question of technology and the gaze

Crowds are going to the MET to see the gaze: XI.9 “Behind the picture [mannequin] it is their gaze that is there”