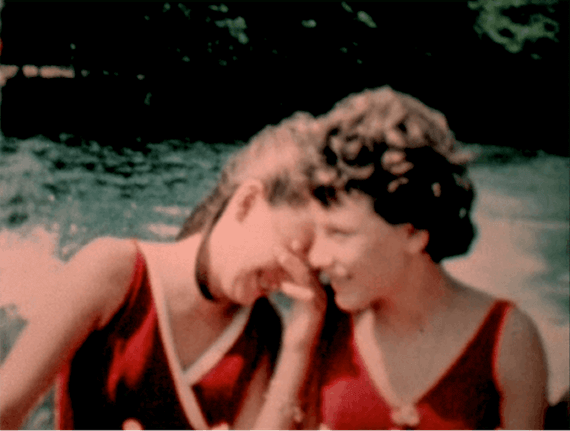 
I’d like to thank Cheryl for introducing me to the work of Marjorie Keller, and allocating a panel to her work in the context of her own, prescient show here at the New Museum.

As a son, I know a thing or two about mothers, and as a multi-disciplinary artist, there are two or three things I know about... film.

I’ve selected a few of my works to show here, works in which I recognize an affinity with Keller’s film. It’s more than a kinship derived from her content or form, which can too easily be described as nonlinear or disjointed. My greater identification is with her way or style or approach (as in never to arrive). In a playful, yet radical, way hers may be called “deranged”, to disorder, to throw into confusion or disarray. This process is especially critical, even political, given the content of the film, which conspires against a fixed meaning. The term I use to describe my own procedure is metonymical. Metonymy makes meaning from what is contiguous to a thing, such as suits for businessmen. Unlike metaphor, which makes meaning through the comparison of two unlike things, for instance roses for cheeks, and comes to a halt with it, metonymy is never-ending; a horizon. My exhibitions are usually comprised of discrepant works, and can appear at first glance like a group show. I call it a “montage-effect”. And no two shows resemble one another.

Before I viewed the film, which I hadn’t seen before, the word chaos grabbed hold of me. From the Greek word khaos – with a k – “abyss, that which gapes wide open, is vast and empty”. The use of chaos was rooted in Hesiod [he-see-ed], who describes khaos as the primeval emptiness of the Universe. In Metamorphoses, Ovid opposes khaos with kosmos, “the ordered universe”. The meaning, “utter confusion”, is extended from the theological use of the word, “the void at the beginning of creation”, in Genesis.

The question then, which any artist is confronted to, and is so effectively posed by Keller in “Daughters of Chaos”, is where or how to begin an act of creation? (The blackness before and after the film thus seemed that much emptier and yet fuller.) This is an equally powerful proposition the film makes by way of the content of the film, suggesting as it does the formation of woman ex nihilo. Keller brilliantly, audaciously, insinuates that once an identity is formed not-all of it can be captured, or symbolicized – that at best it lies in the interstices, or the cut. This is where the content of “Daughters” merges with the form of “Chaos” – if I can put it like that. Identity as horizon. The Woman does not exist, she must be invented.

I can also identify with Keller’s aiming for this ineffable, “unspeakable”, or imminent realm. She strings us along, so as not to play along, invoking a place beyond the shots she links together, a concatenation of specific yet enigmatic images, for instance mistaking a wedding for a cult ritual – the Manson Family sprang to mind. Yet, to repeat, we’re aware that something escapes the mortifying effects of the signifier. I’d wager that where this displacement of what cannot be said winds up is in the voices of the soundtrack, especially the laughter and the truncated or interrupted sentences.

In concluding, Keller insinuates it’s neither sound nor image that inaugurates an act of creation out of the nothing, but a cut. “In the beginning was the Word”, which is to say the signifier, the first cut and the deepest. What follows is beauty, which Keller conducts with acuity and ardor.