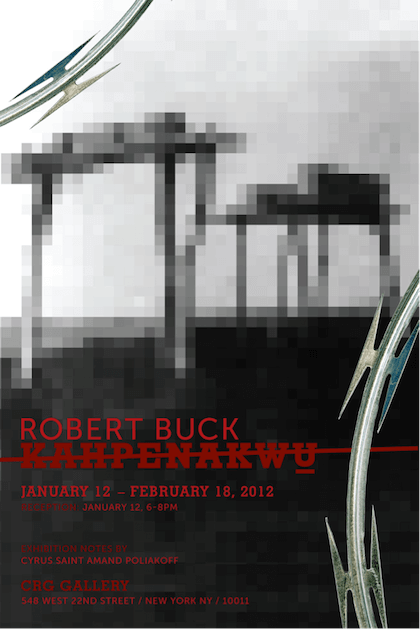 I’d like to begin by showing examples of my earlier work. The brief montage will illustrate by contrast the alteration the current work made. I’ll then describe how the new work itself manifests this shift. Cyrus will consider the exhibition in a wider context, including what art has to teach psychoanalysis.

It was not easy to determine from what place I should speak tonight. When making art, I cannot say that psychoanalysis is also at work. Yet something changed on my way West, something to do with knowledge, a modification in “know how”. And this has both to do with connaissance, or practical knowledge, and savior faire, “how to”.

There is in art making, like psychoanalysis, a before and after, but nothing prepared me for the rift I experienced with “Kahpenakwu”, in good part due to my act of self-nomination by a single vowel in April 2008 from Beck to Buck.

One demonstrative way to trace this fault line through the work may be to consider how the hole appears in it, how I’ve “handled” it. The early “true crime” works were an attempt to constitute a “subject supposed to know” – I can now see this is the solution to the mysteries they invited. The work until now stuffed or covered the hole to foil the inconsistency of the Other. This is also where things ran aground, on the rock of castration.

The moment of inspiration for “Kahpenakwu”, which is Comanche for “West”, came not long after I purchased an iPhone and had it in the desert for the first time. It’s useless there, plastic and glass, a mute remainder, exemplified by what Lacan forecast with his neologism lathouse. (The smoked Plexiglas I used in the sculptures is analogous to Guerilla Glass, the sheet glass manufactured by Corning for portable electronic devices.) It was as if I was standing with a foot in two worlds, one regulated by man-made time, the other timeless, prehistoric. Playing with the signifiers “on the grid” and “off the grid” was one way of contending with this. I wanted to work in this gap, which encompassed two more – land and sky, near and far – to set the materials of the land, and close proximities, against the semblants of the sky, and vast distances.

Once the show opened, I heard myself repeatedly say, usually upon receiving a compliment – for instance “breakthrough” or “new ground” – that with this work I had “nothing left to lose”. (Explain briefly the turbulence that happened in the wake of the name change.) And it’s in what is implied in the Other’s vehement and at times censorious reaction that I encountered the true rupture, castration. Traces of this can be detected in the works that re-order the semblants, drain them of life while at the same time re-inventing them.

One aim in working on this seminar was to locate traces of the letter as it was littered in the show – traces of my new savoir, pieces of a new knowledge. And I can find it in what remains of the desert debris, objects wasted by the letter – corrugated metal husk, rusted water tank, sun-bleached steer skull, tire“road gators”, wood shipping pallet, mutilated body parts, used shotgun shells, faded Coke cans.

There is in the new work playfulness and irony, which were mostly absent before. Many people observed that it was the sky or fabric pieces that caused them to re-calibrate other works in the show.

Where once there were holes, now there are topologies of knots around them – barbwire base, razor-wire sun, driftwood nebula. Or edges – the barbwire of “Minotuar”, smoked Plexiglas pieces, the mountains, yucca leaves, “border” or frontier as theme, the pixel, and the grid.

Semblants too have fallen or been re-inscribed as I said earlier: US flag; Coke can; Indian drawings, the West, Name-of-the-Father itself, both in the “By Any Other Name” and “Second Hand” painting series.

What emerged for me through the work towards the seminar, and via the psychoanalytic discourse, was the silence of the desert and the invocatory drive, a silence that lies beyond the gaze. I realize now, I took refuge in the desert as much for the distances the eye can travel, “to see them coming”, as for the silence. As object, silence could now come to fill the hole – silence the demand, the ché voui – not keep excavating it as it had since I was a boy. The same can be said of the letter, before it’s littered, and in my case the Name-of-the-Father.

One final trace of what’s been littered, and hidden in plain sight, not unlike “The Purloined Letter”, is the “u” in “Kahpenakwu”, betrayed by the diacritical marks, a crossing over and a crossing out. For what lies there is a “u”, homophonous to “you”, Other, that has been crossed out – the barred Other, S (barred A), literally, littorally. Any direction “West” too has been barred, and with it the semblant “The West”, the cultural detritus of our fathers. This new “u”, struck-out yet accentuated, is like an insignia, one that act-knowledges that while the signifier is in the symbolic, the letter is in the real. Looking at it askew, the show makes due with what lies in the wake of a fantasy, the border that may have been crossed, from e to u.