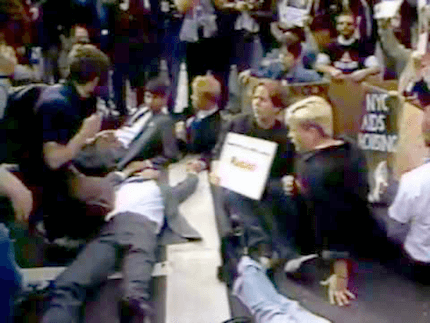 
What struck me immediately upon re-watching Target City Hall nearly twenty-five years after having helped to make it was not only how vehemently it transmits the stakes of the AIDS crisis in 1989, but how successfully as a work of grassroots activism it is identical to itself. This reflexivity, wherein the production and the product are one and the same thing, was critical. I had forgotten how well the tape achieved this. In other words, Jocelyn Taylor, in her introduction in the tape itself, enumerates plainly the guiding principles of DIVA TV, what I had anticipated my own introductory remarks might include. The tape actualizes the manifesto she recites. It is a production that speaks of and for itself, loudly and proudly. To be clear, DIVA TV, or Damned Interfering Video Activist Television, was an affinity group within ACT UP.

By recording the various aspects of the City Hall demonstration, TCH traces the full arc of the action, and effectively portrays the urgency and anger of the crisis, as well as the historical moment to which it responded. The tape perforce had to serve a variety of functions, not only for outreach and educational purposes, but to place ACT UP within the wider context of the gay rights movement and on the horizon of local and national politics – “Health Care is A Right”. TCH also captures the apprehension and fears many of us experienced around the demonstrations, and thus betrays the full spectrum and complexity – the personal stakes – of our involvement, convictions, and activism. What moved me as well was our determination to maintain some claim on enjoyment. Despite the forces arrayed against us, the tremendous losses, anger and mourning, there was humor, play, and liveliness, not only while planning the actions, but also in taking them. It was in part this spirit that contributed to the street theater, graphics, and take-no-prisoner tactics that came to characterize ACT UP protests.

DIVA TV’s immediate purpose as an affinity group was counter surveillance. One or two of us, armed with cameras, would accompany other affinity groups within ACT UP into the actions. This was to bear witness to any police misconduct, but also to deter it. The footage of CHER – before, during and after the City Hall demonstration – is an example of this. Our secondary purpose was to share the footage with ACT UP as a whole, for the various reasons Jocelyn outlines. In an age before social media this was paramount, not only for civil disobedience training purposes but for the dissemination of educational safe-sex information. But as importantly, it was also an essential and empowering means for us to reflect ourselves, as we wished to ¬¬be represented – our desires, aims, communities, history, modes of enjoyment. It was also a critical way to counter the misinformation, homophobia, and propaganda that persisted about AIDS and ACT UP in the media at large – a necessity not to be underestimated due to the lack of viable representations at the time. And for me all of this cumulated in something Sister Mary Corita states, “To feel well.” “The ability to feel is beautiful”.

How DIVA TV worked as a group changed over time, but most often two or three of us would edit an individual segment, which then another handful of us would assemble into a longer tape. For example, Greg Bordowitz and I edited the CHER segment, and with Jean Carlomusto worked on the final TCH tape as well. What DIVA TV was able to do in 1989, for both documentation and dissemination purposes, was made possible by the introduction of smaller, more affordable video cameras, camcorders, in the mid-1980s. To edit the footage we would beg, borrow or steal time off-hours at editing facilities any one of us had access to or were affiliated with at the time, notably Gay Men’s Health Crisis, Deep Dish TV, and Electronic Arts Intermix.

We knew then our work had to achieve many things, and looking back my sense is that it did. I can recognize now that in a very practical and pertinent way organization, documentation, production, education, outreach, and empowerment were all of a piece.

I had not seen the two Sister Mary Corita documentaries, but the reason for pairing them with TCH by Jason and Julie was immediately apparent. What correlate the tapes for me are the instructional aspect and the reflexive form, practicing the very principles they espouse, but also something like the power of words and democracy at work.

I want to thank Julie and Jason for the opportunity to introduce these tapes to you, for the chance to bear witness again, and to be reminded – not of the neglect and dereliction of leadership, the crisis of democracy, and the seismic loss ¬¬– but the fury, vitality and efficacy of our response to it.