OCCUPY WALL STREET: It Is Right to Rebel Without a Cause
(these grievances are not-all inclusive)
Culture & Psychoanalysis 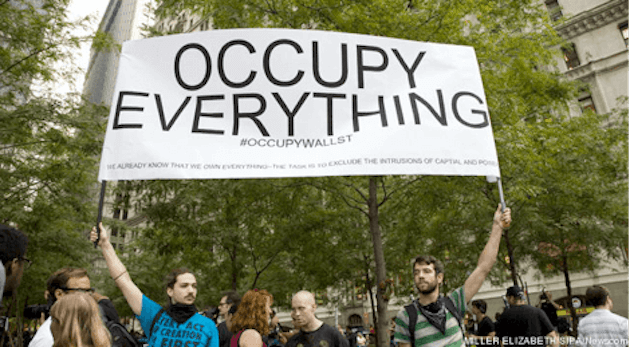 I’d like to place Ross’ paper in a wider cultural context with attention to the signifiers extracted from or produced by the Occupy Movement.

As Jacques Lacan said, “One can do away with the Name-of-the-Father on the condition one makes use of it.” In the our hypermodern era of the Other That Doesn’t exist, the Not-All, OWS is a particularly graphic example of this – both the failure of the N-O-F, as well as the way in which one, or the many, as Ross has elucidated, can utitlize it.

OWS struggles to make the era of the Other That Doesn’t Exist, of the Not-All, “add up”. The fractions do, but the signifiers don’t, which is the trouble. A symbolic disorder, the lack in the Other, is borne by the corresponding signifier “Occupy ( )”. The numerical signifiers were extracted from the mainstream media to account for the incommensurability of these “fractions” as a result of the financial debacle. Their complimentary ordered pair of 99 and 1 (equivocal to Main Street and Wall Street) had immediate currency because they typified our present-day culture of evaluation, statistics, and quantification, thus maximizing identification through the symptom that Ross traced.

The aim of OWS is to “occupy” the place of the lost object. Impossible of course, so a compensatory signifier emerged, “occupy”. A leaderless movement, OWS is not unlike the larger political landscape, wherein no leader, master, has risen to fill the empty place, as semblant, including Obama (who has said he leads from behind), left by the crash.

This is what Pierre Gilles Gueguen outlines in his paper on Occupy Wall Street, “The Party of No, The Tea Party, and Occupy Wall Street”, which he wrote with reference to Jacques-Alain Miller’s 1999 book “Ordinary Psychosis”. Referring to the missing N-O-F, Gueguen writes, “It is a call to a father who can say yes to the greater particularity of the subject and thereby connect him to the social link.” And quoting Miller, he asks, “From where does the master-signifier emerge? From the routine and specific to the social relation? From the social link? If there is no social link without the master-signifier, it’s a circle.”

Is it of no coincidence that following this collapse of the N-O-F – financial institutions like Lehman Brothers, AIG, etc. – and its “aftermath”, the division of 100 into 99 and 1, that the signifier “foreclosure” would emerge, specifically as shorthand for the resulting housing crisis? Uncanny, for the signifier locates us squarely in the era of “Ordinary Psychosis”, as J. A. Miller has named it. “Foreclosure”, as defined by Lacan in Seminar III, “The Psychoses”, is the failure of the paternal function, the absence of the fundamental signifier to organize the rest, the S2s. (The equivocation may be to the leaderless aspect of the “Occupy” movement.) Foreclosed from the Symbolic, it returns in the Real, precisely as the empty place left by the N-O-F, ( ).

“Occupy” is a transitive verb, one without an object, which is cannily represented in the graphics surrounding the various manifestations of the movement, and reminiscent of the matheme for insignia, as defined by Miller in “The Sinthome, A Mixture of Symptom and Fantasy”, as S1, a.

An early and perhaps representative demand of OWS was “We are our demand”. This can be ciphered as the demand for demand itself, open, unsatisfied, a means to sustain the absent cause of desire, ( ). Again not surprising in the wake of the collapse of an economy that had fueled desire and the semblants that supported it.

“We are our demand”, we demand ourselves, we demand that we can make demands – rings as manqué á etre, want-to-be, want of being. This is what is disclosed by the Occupy movement in the new world disorder, and what reveals semblants as counterfeit and identifications bankrupt. Here the drive and the Real emerge.

So if what does “add up” with the 99 and 1 in the era of the Not-All is the lost cause, then it may also be proof of the shift from the discourse of the master to the discourse of the analyst, where the remainder, a, albeit as false object, inhabits the place of the master. What sets the Occupy movement apart from previous social and political movements may be its struggle to account for how surplus value, not of labor, but of enjoyment, plus-de-jouir, is being exploited, tabulated, accrued. The movement acknowledges that enjoyment “counts”, but also accommodates the uncertainty in what ways it does exactly, which is paradoxically both its lost cause and potential success.

A few questions emerged that I’ve yet to answer, for instance:

Is the identification to an unsatisfied desire an hysterical one?

With reference to our recent work on the Seminar XV, “The Psychoanalytic Act”, did identification shift from the Imaginary to the Symbolic, i.e. “Occupy” as a new N-O-F? And with Seminar XX in mind, does the movement not also herald the one-by-one?

What knowledge is being siphoned from our surplus enjoyment? Does the remainder locate us, barred subjects, segregated 99%, more precisely in the university discourse, and not the analytic one?

To conclude, I again quote Gueguen: “Lacan invites the analyst to serve the Father in a world where we must go without it”.