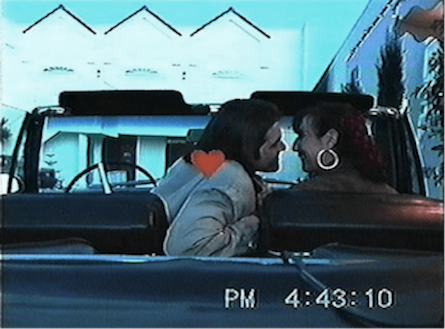 
I remember standing at my grandmother's grave with my father and grandfather looking down at the dates on her stone when my grandfather said, "You know, Jimmy, your mother used to sleep around." My father didn't answer, as if he'd heard it all before. We just got in the car and left. Looking back now, I understand that conversation was older than all of us. It hadn't changed. – Gregory Shephard

Years ago my father told me I had bad breath. He made an appointment with a generalist. When I arrived, I realized it was a psychoanalyst. I could not believe my father had sent me to one, knowing his allergy to them. My first comment to the doctor was "There must be some mistake. My father sent me to see a generalist because he said I had bad breath." And the man replied, "You do everything your father tells you to do?” I became his patient. – Sophie Calle

DOUBLE BLIND is the story of two artists, Sophie Calle and Gregory Shephard, who drive cross-country at cross-purposes – her aim is to marry him, his aim is to make a movie. Armed with small-format video camcorders, the two take aim at each other, and somehow manage to make a movie of their marriage. From courtship to climax to dénouement, meandering from New York to Oakland via Las Vegas in his Cadillac convertible, the couple is continually at odds. The difference between his story and hers is the story the tape has to tell, which places DOUBLE BLIND in somewhat of a narrative double bind. Struggling to negotiate the sexual difference of these two very uneasy riders – who do not drive so much as they are driven in flights towards opposing fantasies – DOUBLE BLIND dramatizes just how compulsory heterosexuality is. [1]

The shot/reverse shot, a traditional cinematic editing technique used to integrate two opposing perspectives, provided the artists with a practical way with which to unify hours of video material shot from their different points of view. Conventionally, this cinematic device sutures a world authored by a single director. In DOUBLE BLIND it must do double-time, stitching together the wildly discordant perspectives of two antagonistic authors into a unified whole. Both want to enunciate a narrative of a fantasy that persists, an image of themselves as desirable to the other – hers of womanliness in wedlock, his of manliness in moviemaking. As the organizing principle of the tape, the shot/reverse shot metaphorically exemplifies the couples opposing desires, representing the struggle for narrative authorship that endlessly wages between them.

With each author participating in the production of the video – both as subject behind the camcorder and as object before it – the male/female binary, at least as it is maintained in mainstream cinematic narrative, is destabilized here. His gaze does not hit the side of her face but the lens of her camcorder, which she trains on him in objection to her own objectification. This is exemplified in a scene in which the two confront one another, camcorder to camcorder, like a pair of cyclops spawned by SONY. Simultaneously recorded and recording, they each strangely mirror the other in their shot/reverse shot battle. Here sexual difference does not neatly fold into one – the masculine. And because both look and are looked at, male/female does not conveniently correspond to active/passive. As for the old Lacanian "being vs. having” charade, she may or may not be the image, he may or may not have it.

Symptomatic of this near breakdown, and enhanced by the shot/reverse shot system, is the latent paranoia the couple experiences at points along the way – as Gregory whispers, "I'm glad she can't hear my mind." The more he withholds "it" ("No sex last night" is her resigned refrain), the further Sophie probes ("You're constantly searching through and turning up evidence of things; invasion of privacy, which you specialize in" is his defense.) As the cherished dichotomy of male/female teeters, the artists scramble to secure it, reinforcing other dualisms throughout the tape.

While the coast-to-coast world outside the car is frozen in still images of so many generic roadside sites, the lovers’ dashboard romance expands inside in real-time, relative to the claustrophobic universe they inhabit there. As perhaps the most drastic division of narrative cohesion, the seamlessness of the soundtrack is split between his thoughts and hers, whispered in betrayal of their exchanged words and actions. Reading from diaries logged daily throughout the trip, or spoken spontaneously in often mean-spirited retorts, their conflicting voice-over commentaries ultimately contest the verisimilitude of their life together through the viewfinder. Each fights for his or her story as fact, the other’s as fiction.

The gendered bifurcation of the narrative also contests the tape’s easy classification as one genre or the other. Is it a road movie – a man's flight from social conformity to a place outside the law – or a melodrama – “a woman's film” of life at home within the law? Inverting the codes of the traditional road movie, the artists' flight is not an escape from a suffocating social order but one moving towards it via marriage. And, with sexual difference portrayed as a protracted conflict between the protagonists, a woman's place is clearly no longer in the home. If genre has a gender, then as a melodramatic road movie, DOUBLE BLIND is a genre-bender.

Road movie/melodrama, shot/reverse shot, inside/outside, static/moving, thoughts/actions, fact/fiction. These binaries all but disappear on the occasion of the couple’s wedding in Las Vegas at a drive-through chapel. This is the “primal scene” of DOUBLE BLIND, the couple’s desired destination. With the convertible roof down, cameras fixed at a distance, and the artists pronounced man and wife, interior opens onto exterior, shot/reverse shot gives way to establishing one, and thought becomes action with the words, “I do.” If only for a moment, the marriage unifies the discordant narratives, dispels doubt, and abolishes the artists’ mutual ambivalence. With the ring she is wed to her fantasy “that a man wanted me enough to marry me.” And his filmmaking fantasy is framed with the establishing shot – a camera angle that in narrative cinema connotes “objectivity.” When the groom kisses the bride, the artists acknowledge the narrative fulfillment provided by the scene, sealing it with a superimposed red heart – love American style.

When Sophie comments over a still of Gregory carrying her across the threshold of a storybook cottage, “This is how it all began,” the cause of DOUBLE BLIND as an effect of the countless romantic narratives that precede it becomes clear. With unhappiness following the couple’s happily-ever-after so closely, the tape exposes normative gender as the ruse that it is – promised by the ritual of marriage yet never inhabitable as husband and wife. Accordingly, gender accumulates “authenticity” through its repetition as performance. Therefore, despite the artists’ best efforts, neither he nor she can “be” a gender; they can only “do” one through repeat performances. [2] This may be why their roadway romance is refracted through an endless succession of personal narratives – memories, anecdotes, stories, fantasies, reveries –all of which naturalize sexual difference.

In the classic cinematic narrative, woman often stands as a sign of sexual difference, fetishized as the other for a masculine gaze, an “objectivity” which consolidates his identity. DOUBLE BLIND does not overlook the significance of Sophie Calle’s willful participation in rehearsing this narrative as a reality. Indivisible from the romantic fantasy, misogyny and masochism are re-presented here as everyday experiences, sanctioned by the institution of marriage. As Gregory says, “Just the fact that we're married… made me want to take you. And not for one second did I want to ask, or need to ask, or feel I should ask. I just felt I wanted to take you. I'm getting an erection just thinking about it.” And as she responds, though only to herself, “That's the first thing marriage has given me.” In DOUBLE BLIND, the question raised by Calle's pursuit of the romantic promise offered by the classic cinematic narrative maybe understood not as Freud’s “What does she want?” but, as Parveen Adams has stated, “How can she want?” [3]

Making a mockery of the artist’s anxious passive/aggressive attempts to do otherwise, DOUBLE BLIND problematizes being/having from male/female through the simultaneous presentation of its directors’ dynamically opposing points of view. Poking holes in the romantic narrative at the level of cinematic enunciation, the artists denaturalize gender uniformity, which they respond to reciprocally at the level of fantasy. Stranded without the classic cinematic narrative compass of male/female, the spectator’s identification must be redirected along the route of active/passive. The title DOUBLE BLIND may suggest, psychoanalytically, in it's metaphorical reference to a blindness experienced by both artists, that the passage through the original (Oedipal) drama to the sexual difference of its dénouement may not be so dissimilar for a boy and girl. Again the question, "What does she want?”, is here mirrored by a subsequent one, “What does he want?” Gregorys ambiguous answer in the end, “To try and tell an honest story,” hints at the dishonesty of DOUBLE BLIND, its dramatic failure to fortify identity on the foundation of heterosexual norms. Repeating the narrative means repeating the role – once more with feeling. Both illusive and elusive, “being” is the affect of “doing” gender, and encore performance in the compulsion to repeat. After all, as Gregory muses somewhere along the way, “It's good to have these destinations until you get there, and then what?”

1. Monique Wittig, “The Straight Mind.” Reprinted in Out There: Marginalization and Contemporary Culture, New York and Cambridge, MA. The New Museum of Contemporary Art and M.I.T. Press, 1990
2. “…the ‘unity’ of a gender is the effect of a regulatory practice that seeks to regulate gender identity uniformity through a compulsory heterosexuality.” In: Judith Butler, Gender Trouble, New York, Routledge, Chapman & Hall, 1990
3. Parveen Adams, “The Three (Dis)graces,” unpublished paper, 1992.