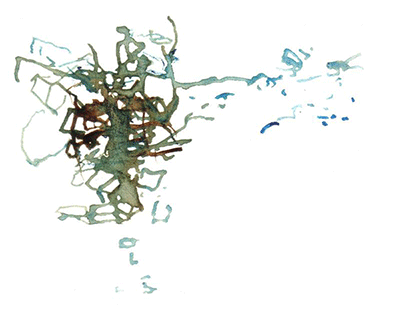 “If a bird were to paint would it not be by letting its feathers fall, a snake by casting off its scales, a tree by letting fall its leaves?” (1) And a human being, what falls when a speaking body paints? Patrick Keesey’s drawings and paintings, created in a neuroscientific-like manner and exhibited in a clinical context (2), may be considered as an answer to this question.

What a hand lays down with a pen, or a brush, is ink, and in Keesey’s drawings shellac-based motley-colored knots of it – sorrels and peats, auburns and roans, hazels and indigos – dirty deposits analogous to the excreta that drops naturally from the body. Yet the art-historical axiom doesn’t sufficiently account for the emphasis on vision in Keesey’s technique, his desire to trace the ways by which the eye apprehends, examines, or devours the world. Nor does the traditional art cliché account for what else ultimately falls in the process.

Simultaneously seeing and seen, the speaking being, which “wants to be”, will ask how do I look? Keesey answers with art, qua science, by first considering the operation of the eye itself, the organ and its function. A saccadic motion is a series of rapid movements of a mechanical device or the body, for example the eye, head, or hand. Keesey draws by indifferently scanning an object in his environment, his hand approximating the erratic lines by which his eyes travel. Never stopping to aesthetically assess the results, Keesey doesn’t render an object in space so much as index or “capture” it.

Yet something else insinuates to make the cumulative marks, the “data”, made through research-like studies, art and not exactly science. Keesey’s works allude to something undetectable by strictly visual or empirical phenomena that escapes science. It is this phantom dimension that seems to captivate or fascinate him, as in fascinum – the voracious or evil eye, that which has the effect of arresting movement and killing life. Apperceived by the artist, permeating the observable world, is the gaze, “deriving”(3) there. The gaze is the specular realm in which the subject is immersed, seen from every point except the one from where he sees. Sight and the gaze do not correspond. “You never look at me from the place I see you. Conversely, what I look at is never what I wish to see.”(4)

Scattered by the artist’s body, what do the empirical transcriptions of his world ultimately verify? Isn’t it the specter of the artist himself, in his environment, in the picture, so to speak, solicited from each of the points of light, both stationary and mobile, upon which his eyes land and his hand records? As he automatically plots the coordinates from where he might be seen, his traces accrue – cluster, swarm, congeal and flock – in tantalizing and murky edies of ink that blot out the white of the page. “If I am anything in the picture, it is always in the form of the screen, which I earlier called the stain, the spot.”(5) It is the apparation of the artist himself – contingent, imminanent, vanishing – that haunts the nebulas of ink.

By recognizing the difference between vision and the eye, Keesey is able to locate his art in the gap between seeing and being seen. This division accounts for the paradoxical consequence in which in his attempt to objectify his world he is objectified by it. It is through his mimicry of a device to empirically record his environment that Keesey is able to draw from this “Other” place. “The gaze I encounter is, not a seen gaze, but a gaze imagined by me in the field of the Other”.(6) Yet while the artist conjures the gaze, he simultaneously cloaks it. Thus, the fretworks, veils, and lattices of ink perform a two-fold function of appeal and evasion.

What finally distinguishes Keesey’s observational works from science is their exhibition, qua art, for public observation. Viewers scan the coils, hanks, and locks of ink defacing the page, invited to decipher the bogus ideograms, glyphs, or letters entangled there. Something is offered to the eye, which precipitates the surrender of the gaze. Summoned, trapped, tamed – it falls. “In any picture, it is precisely in seeking the gaze in each of its points that you will see it disappear.”(7)

The hand is fundamentally an instrument with which to write and left to its own devices, divorced from the eye, it will do so reflexively. As the visible world is mortified by language, is it any wonder Keesey’s saccadic dictations of it transmute visually as gobbledygook, mumbo-jumbo, or gibberish?

If “the gaze is the underside of consciousness”(8) – unseen, evanescent, omnipresent – then Keesey shows how only by the artist’s hand, beyond science, can its traces be littered.