Monument Proposal: The Glazing Globe
The CCA Wattis Institute for Contemporary Art: Monuments for the USA
In conjunction with an exhibition at the Logan Galleries of the CCA San Francisco campus
April 7 to May 14, 2005 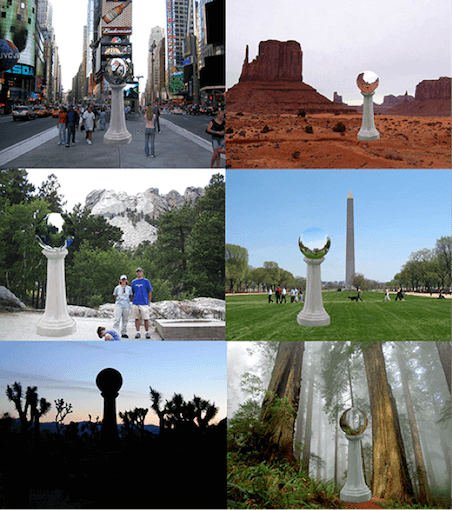 Although the garden gazing globe has a long history beginning in thirteenth-century Venice, it is commonly known in its contemporary manifestation as a suburban lawn ornament. The mirrored ball, usually set atop a concrete pedestal and placed in a garden, interrupts the beauty of the landscape only to intensify it. Reflected in the globe, the magnificence of the encircling panorama can be enjoyed at a single glance, inviting contemplation and wonder. The viewer is at one with the scene.

Relocated and enlarged considerably in scale, this suburban lawn novelty would make an ideal monument to the contemporary United States. As the reflective beauty of the mirrored sphere is contingent upon the visual drama of the surrounding landscape, the monumental backyard tchotchke would enhance any location in the United States, from national park to urban plaza. Absurd and whimsical yet totemic and strange, the towering lawn curio would metaphorically reflect deeper, more contradictory currents in the American social landscape. Supersized and transplanted, the colossal ornament is lastly an ironic rebuke to the increasing suburbanization of both urban and rural America.

Neither entirely monument nor sculpture, architecture nor kiosk, the towering ornament, made of steel and concrete, insinuates an array of amusing yet disquieting associations – golem, Cyclops, alien spacecraft. At the same time, the monument provides a fitting respite in a post-9/11 America and a novel means by which to reflect upon it. Over time, the globes have been referred to as Spheres of Light, Good Luck Balls, and Globes of Happiness.

Historically, the reflective ball was used as a rudimentary surveillance device. In Italy, it was placed in the garden so nobility could survey approaching visitors; later, it was situated in Victorian homes so servants could regulate the timing of courses to the dining room. Today, citizens who gaze upon the [proposed] immense unblinking eye-like orb could survey not only themselves but their neighbors as well. Although enchanting and benign, the proposed monument draws on darker historical associations, notably Jeremy Bentham’s eighteenth-century surveillance structure, the panopticon.

Preserving the verisimilitude of the original artifact in the process of displacing it is key. The tapered, eight-sided pedestal is cast in reinforced concrete and measures alternately 48” to 18” across and 114” tall. The polished stainless steel globe is 48” in diameter, hollow and approximately 1” thick. Assembled, the piece stands 13 feet high, with the base pedestal 48” across. (There is a discrepancy in the total height of the piece, as the dish that cups the globe is approximately 6” deep.)

At Times Square a large traffic island stretches between 43rd and 44th Streets and Broadway and Seventh Avenue. A block long and twenty-four feet wide, it is a stage for tourists to take pictures and enjoy the wide-angle views of the wraparound spectacle. This is an ideal and feasible site for the large-scale tchotchke, one that would capitalize on its metaphoric and visual potentials. This “urban garden” location would also allow for optimum long-range views, both pedestrian and vehicular, of the brilliant ornament.

48” in diameter and weighing 400 lbs., the steel globe is hollow and approximately 1” thick. Custom made by seaming together several “orange slices” of steel, the assembled globe is polished to a reflective finish. They are distributed to any site in the US via the west coast.

The giant globe is affixed to a tapered concrete pedestal, which measures alternately 48” to 18” across, and 114” high. The pedestal replicates a standard “garden variety” eight-sided concrete stand. The model for the enlarged pedestal is created in the studio using wood and Bondo. As the pedestal is symmetrical, it is necessary to model only one half of it. The dish that sits atop the pedestal, and cradles the globe, is modeled and cast as a single unit. This guarantees maximum support.

The enlarged pedestal is cast in 6,000 PSI (pressure per-square-inch) -strength concrete. (Sidewalk concrete is usually 3,500 PSI.) Fiber, chemical compounds and gravel are added to the cement mix for added strength. Further reinforcement is achieved with rebars. The studio will work with Acosta Art Deco, a statuary company in Astoria, Queens, to mold and cast the pedestal. With no undercuts in the pedestal, a mother-mold is not necessary. Consequently, a fiberglass mold will be used to cast the concrete parts.

Once completed, the three pedestal components – the two sides and the dish – are seamed with concrete on site. The two halves of the pedestal hug a metal column, which provides further structural support. The assembled pedestal would be secured to any concrete surface with rebars. (By necessity, any underlying pavement would have to be drilled and then re-poured.) For a ground site, a sunken concrete base would be poured. Thus, each of the eight, 16” high sides of the base of the pedestal will meet any surface at right angles, with no additional reinforcement required. The steel globe and the concrete pedestal are weather resistant. (Once installed, for aesthetic reasons only, it may be determined that the pedestal should be painted a commonly used off-white waterproof paint.)

With the pedestal in place, the globe is lowered into the dish. It is secured with steel dowels welded to the base of the ball, which correspond to pre-drilled holes in the dish. (Contractors associated with Acosta Art Deco would install both the pedestal and globe.)

Regarding the budget (provided on request), dimensions of the oversized pedestal can be altered slightly with no significant fluctuation in cost. The size of the sphere too can be modified at minimum cost. If de-installation is necessary, it may be cost effective to demolish the concrete pedestal rather than pay for handling, transportation, and storage.