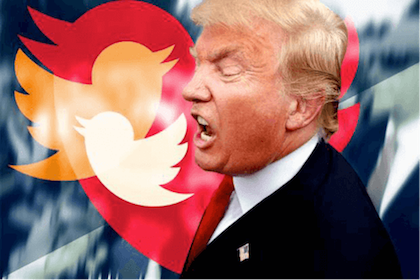 I spent Thanksgiving off-the-grid in Far West Texas, where my Republican neighbors informed me that the President-elect is being referred to as the Trumpet. Many Christian fundamentalists apparently believe Donald Trump is the last of the seven “trumps” prophesized by the Book of Revelation. The homophony of the Trump-Pence ticket is often cited as proof in this push-to-jouir. “Judgment Day Is Upon Us!” “Repent!” “Immanent Rapture!”

These end time auguries flourish in the era of Facebook, Instagram, clickbaits, listicles, hearts and hash-tags. Fraudulent news spreads like wildfire via our false objects. Engage your gizmo and see yourself reflected in it. Fixions, not facts. “As one of [Trump’s] surrogates said recently, ‘There’s no such thing, unfortunately, anymore, of facts.’”[1].

What Trump’s ascendancy volubly announces is the quarter-turn from the university to analytic discourse Lacan formulated in Seminar XXVII. The analytic discourse has now dislocated the one defined by the university that dominated American political life for the last fifty years, with its emphasis on multiculturalism, political correctness, and identity politics. With Trump’s triumph, and all that he embodies and permits, the object a at the social pinnacle heralded by work in the Freudian Field has incontrovertibly come to pass – the White House, Wall Street, the world. Isn’t this the concussion we all felt in the early hours of “11/9”? The chicanery of Russian hacking notwithstanding, in hindsight one wonders if Bernie Sanders could have won with his working-class platform of income inequality. Pinpointed by an IP address, 21st Century subjects are numbered, “classified”, not by labor but modes of enjoyment. This is now the exploited remainder, yet the non-universal of the one-by-one makes an “enjoyment-class” a political impossibility.

Trump touted not a political discourse but an entrepreneurial one, “The Art of the Deal”. (Quoting Andy Warhol: “Business art is the step that comes after art. Being good in business is the most fascinating kind of art. Making money is art, and working is art ¬– and good business is the best art”. [2] Warhol too knew well how to be a mirror.) Trump might bloviate about borders but he obeys none. A globalized jouissance. Walls may reinforce international borders against the migration of others, but the unobstructed cross-border trade of goods and services will undoubtedly quicken with his administration. (Economists have already foretold of a financial “field of dreams” for the next four years.)

“A voice like a trumpet”. It wasn’t what he said but how he said it that Trump trampled any semblance of truth. “The fact that one says remains forgotten behind what is said in what is heard.” [3] J’ouis sens. With his rudimentary, nearly monosyllabic vocabulary he reduced public discourse to a type of lallation. Trump punked mainstream corporate media with his tweets; his incessant, compulsive, indiscriminate form of writing. His bully pulpit, his escabeau. In less than 140 characters, he feeds our atomized spans of attention, and antagonizes anyone who questions him. Trump: our Cyberbully in Chief. Chilling. (The latest prognostication is our “unpresidented” [4] President-elect will appoint Sylvester Stallone, best known for his roles as “Rocky” and “Rambo”, chairman of the National Endowment of the Arts. [5] True or false?)

With our backs against the wall – the proposed one with Mexico or the virtual one with common decency and democracy – it’s good to be reminded of the one evoked by Jacques-Alain Miller, a mur. [6] Miller cited Lacan’s neologism amur, amour and wall, expressly in its function as guide within the analytic discourse. It’s by puncturing this wall of language, (a)mur, that we find our coordinates as speaking bodies – for each One a GPS as we head off-the-grid to the sound of the Trump-Pence.

1. “Truth and Lies in the Age of Trump”, The New York Times, December 10, 2016, http://www.nytimes.com/2016/12/10/opinion/truth-and-lies-in-the-age-of-trump.html
2. Patrick S. Smith, “Andy Warhol’s Art and Film”, Umi Research Press, 1986
3. Jacques Lacan, “L’étourdit”, 1972
4. On December 17, 2016, via Twitter Trump accused China of stealing a U.S. Navy drone. He tweeted it was an “unpresidented” act, misspelling unprecedented. The tweet was later reissued, and the erroneous one removed.
5. http://www.latimes.com/entertainment/la-et-entertainment-news-updates-trump-eyeing-a-sly-figure-for-key-arts-1481904627-htmlstory.html
6. Jacques-Alain Miller, “Presentation of the theme for the Xth Congress of the WAP in Rio de Janeiro in 2016”, http://www.lacan.com/actuality/2014/07/lecture-by-jacques-alain-miller-paris-41514/