The Zombie Epidemic: A Hypermodern Version of the Apocalypse
Culture & Psychoanalysis 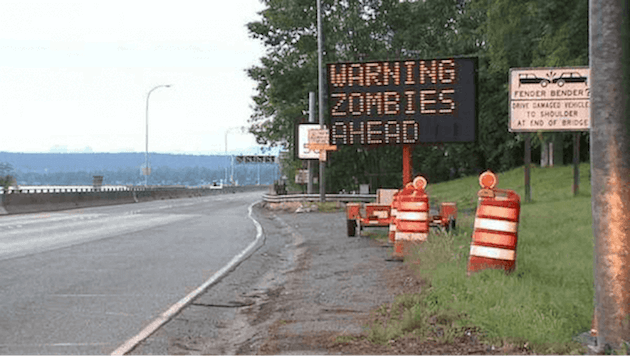 The Zombie Epidemic: An Undying Defense Against the Real

“We came to put a wreath on father’s grave” is how a character describes her purpose in the opening scene of George Romero’s “Night of the Living Dead”, the 1968 film that unleashes the zombie of the hypermodern era. Shambling, not yet up to speed, but persistent, a zombie rises to better her task of memorializing the dead father by resurrecting him. The zombie father. As J. A. Miller states in his 1996 seminar, “The Other That Doesn’t Exist and His Ethical Committees”, “One can only make do without The-Name-of-the-Father qua real on condition that one makes use of it as semblant” – the zombie epidemic as A Name-of-the-Father.

In the same seminar, Miller refers to Freud’s 1930 “Civilization and Its Discontents” in order to distinguish the malaise of the Victorian epoch from the unease of our own, which, because the real has broken free from nature by the so-called advances of the binary of capitalism and science, he identifies as an impasse. “Capitalism and science have combined to make nature disappear. The epoch is caught in an ever-accelerating movement of vertiginous dematerialization”, from which we can “see the judgment being written on the horizon – at the horizon rather than on the wall – that everything is nothing but semblant. Indeed, the immersion of the contemporary subject in semblants henceforth makes the real a question for everyone. A question about which, it would not be too much to say, that it takes shape against a background of anguish” – much like the backdrop against which hordes of zombies take shape.

Freud implicates civilization when he comes to speak of the drive. According to Miller, “civilization is a mode of jouissance, a system of the distribution of jouissance through the use of semblants”. Embodying the impasses wrought by science and capitalism, the zombie is an undying semblant for this jouissance. In our age of the Other That Doesn’t Exist, the superego is not the Freudian one of prohibition, duty, and guilt, which makes the other exist, but one of “jouis”, the imperative, as the media giant Time Warner advertises, to “Enjoy Better”. For the survivors, the zombie throngs may be construe as this voracious super-ego, “in so far as it rivets the subject to the pursuit of surplus-jouissance”. Picture the familiar scene of humans looting a shopping mall, hoarding commodities, or gorging themselves on stockpiles of canned goods, as zombies amass outside. Indeed, void of language, predacious, fragmented, zombies are pure drive, death drive.

If the zombie is a semblant, par excellence of our times, able to invoke the great disorder in the real, it is only by appeasing it. If for almost fifty years legions of the living dead have been able to keep pace with the growing impasses of civilization, then it’s due to their capacity to cipher them: atomic radiation, civil rights, consumerism, reproduction, over-population, pandemics. Capitalism’s marketing of our fixion of the zombie colludes with science having destroyed “the fixion of the real”.

The predominant feature of the wasteland through which droves of the undead roam, and where their combatants must subsist, is one in which the traditional institutions of civilization – church, government, army, hospitals, police, television, radio, shopping malls – are rendered vacant, derelict, useless – husks laid bare explicitly as semblants. The “walking dead” – the living, speaking beings – the ones who we might say are not duped by The-Name-of-the-Father – wander a shadow world in which the symbolic has been ransacked by the imaginary, the remains of an empire flooded “industrially with semblants, of which the ever accelerating production comprises a world in which the idea of nature is left no other function than nostalgia", in which over population is rampant and waste has outstripped production. Or as a Tele-evangelist in “Dawn of the Dead” expresses it, “there is no more room in hell”.

But as Jorge so well makes clear, the zombie is not the remainder, the waste product, of globalization, we are. Yet this surplus, anal object is not a semblant, which may explain why the unrelenting zombie masses can provoke anxiety. And this presents a paradox, for it is with anxiety that we, “the living dead”, “infected” by language (as the AMC website states, “whatever it is that causes the zombies, is something everyone already has”) have certitude of our existence in the world. As Eric Laurent stated during the last PULSE seminar in his address to the New York Academy of Medicine, “The Body and Its Organs in the 21st Century”, anxiety deprives us of the functional use of the body. Yet one is sure this anxiety is one’s own, and with it certainty of one’s existence in the world. This anxiety cannot be quantified or counted, recorded or pictured via X-rays, MRIs, or CAT-scans, despite advances in medical technology and attempts by ethical committees to do so. Nor can it be explained neuro-scientifically. It escapes science – but not psychoanalysis.

As Miller writes, “the use of semblants is in vain, ineffective, even harmful, if it results in an impasse on the real in question. But this real is not the real of the discourse of science, not the real made gangrenous by those semblants that emerge from it, which one is reduced to approach by numbers in order to locate it.” It is the real specific to the unconscious.

Again Miller, ”in the 21st Century, psychoanalysis will have to be centered on dismantling the defense against the real, of disordering it”, which is exactly what Jorge has begun to do with his lucid work on the zombie epidemic of our hypermodern civilization and its impasses.