We Need To Talk About Kevin: Inconsistency and the Act
Culture & Psychoanalysis 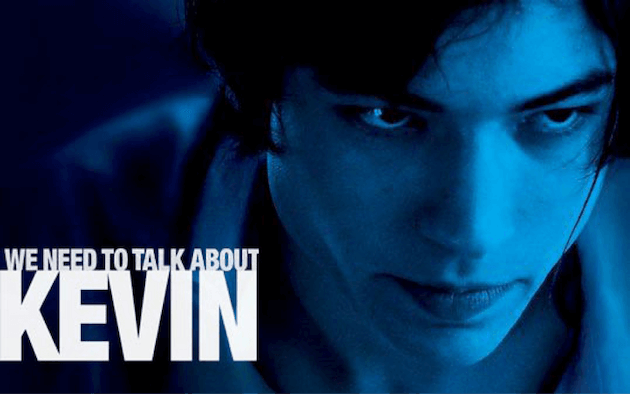 We Need To Talk About Kevan – with an a

INTRODUCTION
I received this e-mail from a friend after inviting her to tonight’s seminar: “Interesting that you should send this today because I have been spacing out my watching of this film over the last week. I've been finding it really difficult to get through, primarily because of this sensation of repulsion I can't shake (not sure if it is solely the grotesque use of the color red or Swinton's acting or Kevin's total disregard for her feelings and seeming inherent evil-ness, or what!). In any case, I cannot attend tomorrow but I’m interested to hear your thoughts after the seminar, if I'm able to get through the film by the end of the week!”

How does the film as a cultural construction create this sense of repulsion, especially since the most sensational act, the massacre, is missing? Beyond what Dinorah has so effectively outlined, how exactly can the film be identified as symptomatic of the hypermodern era through the mechanics of its production – editing, cinematography, sound? How exactly does it create the sense of perplexity that Dinorah describes?

The editing of the film is especially disorienting. Two timeframes are collapsed into one – the time it takes for narrative of the film to unfold, 112 minutes, versus the chronological time of the story itself, approximately 20 years – non-sequential versus sequential. The film alerts us to its distortion of time with the blinking digital clock, which tells us that time is both suspended and “alarming”. This chimes with Kevin’s feint not to know how to count, defying Eva with his incorrect recital of the numbers. Yet, he knows very well how to count but chooses not to, not unlike the editing of the film itself. This extreme a-temporality is a large part of what makes the experience of watching “Kevin” hypermodern.

Equaling confounding is how explicitly the film is split by the imaginary relation of capture and rivalry between Kevin and Eva, which it instills with “through the looking glass”-like effects, vitreous shots of water, windows and screens, to create a mise en abyme – a hall of mirrors ¬– an infinite imaginary collapse of mother and son without symbolic intervention. As Dinorah pointed out, for almost every salient detail specific to Kevin, the same pertains to Eva. For example, in one unsettling set of shots, in which Kevin’s spits nails and Eva eggshells, it’s as if they share a single body. (While it’s painfully obvious why Eva can’t swallow eggshells, why Kevin pulls out fingernails isn’t. This is what I discovered: the tissue beneath the fingernail, what the nail plate protects, is referred to as the matrix, the root word for which is mater, matri, matriarch, mother. The matrix is responsible for producing the nail plate.)

Like the moment of perplexity experienced by Kevin to which he responds “I am the context”, Eva experiences a moment of perplexity during the opening scene of Other jouissance of the tomatina festival, in which, being held aloft by the crowd in a cruciform attitude – which Kevin’s later posture on stage in the gymnasium mirrors – after a few moments she seems surprised to find herself there. It’s as if she realizes the presence of others, spectators, the camera – not apart of the scene, but the “seen”. However, although the gaze has been there all along for Eva, it’s “born” with Kevin. As Dinorah quotes Lacan: “The child becomes the object of the mother and does not have (an)other function than to reveal the truth of the object.” Could this scene of Eva’s be construe as her own acting-out, one that results in her “pound of flesh”, namely Kevin? As Lacan states in his seminar of January 23, 1963 on “Anxiety”, “Between the subject here, which is I might say ‘othered’ in its fictional structure, and the non-authentifiable Other, never completely, what emerges is this remainder, a, it is the pound of flesh [...] this is the feature you will always find in acting-out.” Is Kevin’s wish, epitomized by his act, as interpreted by Dinorah as a passage a’ l’acte, quoting Lacan from January 16, 1963, “to make himself appear as pure object, black fetish”, the sadist to make Eva’s anxiety “vibrate”?

GAZE?
To play into Dinorah’s query “which object is Kevin for Eva”, he’s the gaze clearly. Isn’t it Eva that Kevin glowers at with accusatory looks? Isn’t it Eva not Kevin who suffers an “always-present spooky gaze” of a deadly excessive jouissance? Isn’t it Eva whose most precious object may be the glass eye? Glass eye? Camera lens? And doesn’t Kevin’s act, according to the non-sequential timeline, put her on stage, and that much more susceptible to other incriminating looks throughout the film. Lacan from January 16, 1963: “This is the object involved since, when all is said and done, it is the object without which there is no anxiety, it is because it is a dangerous object.” Isn’t it this anxiety created by the film, its relentless solicitation of Eva by the gaze, which my friend referred to as “this sensation of repulsion I can’t shake”?

Immediately following the act, emerging from the school, Kevin willingly and demonstratively lays down – can we say he falls down according to Dinorah’s interpretation of a passage a’ l’acte, perhaps to literalize it? But according to what follows in the a-temporality of the film, can Kevin’s act not also be ciphered as a laying down or taming of the gaze, as Lacan describes it in Seminar XI, one that diminishes an unlimited jouissance for Eva?

As Dinorah pointed out, archery for Kevin begins with Eva reading “Robin Hood” to him, in an unusual instance of mother-son fealty, which occurs interestingly not via the gaze but the voice. The emblematic scene that crystallizes their imaginary relation, one without symbolic mediation, is the target reflected in Kevin’s eye, which typifies their rivalry, making Kevin and Eva both targets – Kevin, specifically his eye, and Eva, by virtue of an earlier shot in which Kevin’s plastic arrow hits her image as she sits at a window. What would have been reflected in Kevin’s eye, and no doubt digitally removed, was the camera itself, the true gaze object that the target veils, and around which the film circles. Can we relate this intrusive gaze of hypermodernity to “the universal eye and the limitless gaze” articulated by Gerard Wajcman?

WHY WHITE?
Another perplexing image in the film is the repeated shot of Kevin crushing dry cereal. Sure, he’s smashing the semblants, but what’s wrong with this picture? The absence of milk! We can assume as an infant Kevin refused Eva’s breast. (There is a reference to this in the book.) According to the emphasis the film places on color-coding and it’s associations: milk, milk white, white screen. Nowhere in the film do we see milk. Is this the white that returns for Eva in the real?

A NAME-OF-THE-FATHER?
The veil that reveals the already dead father can only be lifted at the end although he’s there from the start of the film, an unknown known. Is it only after Eva parts the veil to discover the dead father that the semblant of the “good mother” evaporates for her? The father’s been dead, but unacknowledged. It is Kevin who pushes to expose this.

The scene of confusion for Kevin, preceding his act, is a discussion between his parents about who will get custody of the children. Franklin, his father, appears to have it all figured out. Eva is anxious, and Kevin is perplexed. Both of them know the paternal function is inconsistent, tenuous, and will fail again if Franklin is granted custody. “Custody”. Custody is the premeditated outcome of Kevin’s act, and ultimately a paternal function that both he and Eva can believe in. With reference to the not-all of a “jouissance that escapes the law”, can’t Kevin’s act be understood as a means to treat jouissance through the law, literally? “Custody” as a Name-of-The-Father, semblant, one that leads to the films resolution through the integration of the two temporal registers, and a truce in their imaginary rivalry. In the final scene, his head shorn, covered in scars – echoes of the “the most honest thing you ever did” – Kevin’s physical resemblance to Eva is diminished. And he knows perfectly well what time it is, it’s his anniversary, and on this mother and son agree. The jump cuts that marred their earlier meetings are missing, and time coheres. No wonder then that the exchange ends when the warden yells “Times up”.

A HAPPY ENDING?
What would a hypermodern happy ending look like? I think we have an answer in “Kevin”. Can we speak of the concluding moments – when the two timeframes coincide, the semblant of the color red disappears from the film, the appearance of the white screen is no longer accompanied by a sound (either the boom between the curtains and the tomatina festival, or the scream during Kevin’s birth), Eva performing motherly duties like washing and ironing and making her son’s bed, her willingness to hug Kevin albeit as a kind of awkward “bear hug”, Kevin’s inability to answer her question why, and most significantly her directing Kevin’s gaze with “Look me in the eye” – as a “how to do with” motherhood for Eva? Coming in the wake of the color red and the Name-of-the-Father, the spectacle of motherhood is the last semblant to fall for Eva. A bearable jouissance: not a good mother, but a good enough one? Does the film cipher this “good enough mother” as her sinthome, one that enables her to cross into the white screen, into “the horizon of the woman”?